Non-dualism and rituals: from the life of Shankara

Non-dualism and rituals: from the life of Shankara 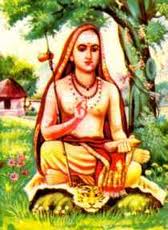 Brahma Satyam Jagan Mithya
Jivo Brahmaiva Na Aparah"
Brahman (the Absolute) is alone real; this world is unreal;
and the Jiva or the individual soul is non-different from Brahman.


Shankaracharya arrived at the holy city of Benares.  After bathing in the holy river Ganga, he announced to his followers that he would go to the Vishvanatha Temple and offer his worship to Lord Shiva.


No one could understand how an adherent of non-dualism could worship God in a temple and teach others about the absolute reality without name and form.  So people flocked to the temple to see if Shankaracharya would participate in the ritual.


The ritual itself passed without incident: learned priests recited the Vedic hymns and the devotees, including Shankaracharya offered the routine ritual oblations.  Then as the ritual ended, Shankara rose with folded hands and spoke:


“Forgive me, O Lord” he said, ”for three mistakes.  First, I know and feel that You are all pervading and omnipresent, and yet I have walked all the way here to worship You within the confines of this temple. Second, I know that there is only one non-dual truth, and thus there is no difference between You and me, yet I worship You as though You are different from me and outside of me.  Finally, I know that this ‘mistake’ is simply my own mind-created concept – and yet I’m asking You to forgive me”.


It was an astonishing performance – Shankara had managed to offer his worship in an exact, traditional manner, but the same time he had not strayed from his non-dualistic philosophy.  The entire city fell at his feet.  Some were impressed with his intellectual knowledge; others were enchanted with his spiritual wisdom and yogic powers; and some were simply overwhelmed by the fact that he had obtained so much wisdom at such an young age.