Self-Realization: Path of action or the Path of knowledge.

"The wise sees knowledge and power as one; they see truly" - Bhagavad Gita 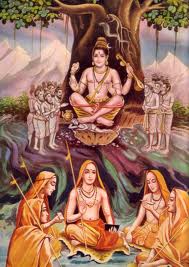 The following excerpt from Shankaracharya’s discourse at Jnana Vapi shows how he created a bridge between the path of knowledge and the path of action.


“Jnana Vapi” means “well of knowledge”.  It is also the name of an area that lies behind the famous temple of Shiva in Banaras.  While Shankaracharya was in Banaras a spiritual conference was arranged to take advantage of his presence.


Some one from the audience started the discussion by saying, “According to you, sir, knowledge alone is the liberating force.  The individual soul becomes bound to the cycle of birth and death as a result of its actions, and therefore in order to attain liberation we must stop performing actions.  If that is the case, how are we to survive in the world?”


Shankaracharya replied, “It’s true that ultimately knowledge is the only liberating force.  But we cannot disregard our duties and follow the path of knowledge exclusively.  In fact, there is no contradiction between the path of knowledge and the path of action.  It is simply a matter of following aparticular path at a particular stage of life.  As long as we have not understood the nature of our internal world, the nature of our body, breath, mind and soul, as well as our relationship with the external world, we must adhere to the path of action”.


“Therefore in the process of performing actions we must learn how to be skillful. Most of our actions are motivated either by the desire to gain something or by the fear that we will end up with something we do not want.  Thus from the beginning our mind is focused on the fruits of actions and when these fruits are achieved, we become attached to them.  If the fruits are not achieved, we are disappointed and dissatisfied because of our intense desire and high expectations.  In both cases, fear is the inevitable outcome.  Either we fear losing the objects we have achieved through our efforts, or we fear that we will not achieve those objects.”


“This fear cripples our creativity and destroys our peace of mind.  If we are successful in our actions we cannot rest, because either we want more or we are afraid of losing whatever we have attained so far.  If we are unsuccessful we are tortured by insecurity and fear of the future.  So we must learn how to perform actions without getting attached to their fruits.”


As Shankaracharya paused, someone from the audience interrupted: “Sir, even the most ignorant people have some idea of why they are tring to do something.  Before attempting to act on the physical level, they think about what they want to accomplish.  As the objective becomes clear, they decide on what means and resources to use to achieve that goal.  As a result, they perform an action.  Therefore, behind any action there is some degree of desire.  The stronger the desire, the more energy is devoted to the task.  Because of that desire, people place a value on the goal they want to achieve.  And depending on how valuable that goal is, they decide which other tasks should be postponed or disregarded.  Thus I do not understand how they can even begin to perform their actions without any desire or attachment to the fruits”.


Shankaracharya replied, “I did not mean that we should set a task at random and start performing it without having a goal.  There are three kinds of actions.  First, there are the compulsory actions we must perform for the sake of maintaining our existence: eating, bathing and cleaning our houses and clothes are examples.  These actions do not create karmic bonds”.


“The second kind of actions are obligatory.  We must perform them for the sake of maintaining healthy relationships with others.  For example, we have karmic bonds with our closest relatives that can be loosened only paying off our karmic debts to those who are connected with us.  We must discharge our obligations to our parents, our children, our spouse, and even to our community and society.  Although we are often tempted to underestimate the importance of these duties, deep in our heart we know that their call cannot be ignored without creating inner conflict and guilt.  Self-condemnation results.  Avoiding thisis reason enough to perform these obligatory actions.  They create karmic bonds only if they are not performed”.


“The third category includes actions we perform with the intention of achieving specific objects for either temporal or so called heavenly purposes.  These actions are binding.  It is the nature of the human mind not to be satisfied with performing only the first two kinds of actions – it takes them for granted.  The sense of purposefulness, satisfaction, and fulfillment comes when we perform actions that are not mandatory.  They are the challenge for us.”


“In this area we must learn to perform our actions selflessly, lovingly, and skillfully, and then we must surrender the fruits of these actions to the higher truth.  By doing so, we minimize the effect of previous karmic bonds.  In other words, attempting to attain freedom from the bondage of karma by performing actions is like using one thorn to extract another.  Sooner or later we reach the realm where there are no more thorns.  That is the realm of knowledge”.


“Understanding that the purpose of performing actions is to extract the roots of previously performed actions gives us the strength we need to perform our actions selflessly and lovingly without becoming attached to their fruits – which then become like extracted thorns.  Extract one thorn with another, and throw them both away.  In this way we attain freedom from the bondage of karma.”


“It is necessary to have the desire to extract the thorns of our previous action.  This is not an unhealthy desire – it motivates us to perform our actions.  It is the desire to keep the fruits that is binding.”


In this way Shankaracharya shared his knowledge and elevated the consciousness of those who studied and practiced under his guidance while he was in Banaras.


The Himalayan Masters: A living tradition by Pandit Rajmani Tigunait
Posted by Unknown at 3:36 PM