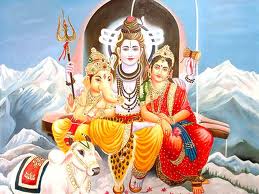 Lord Ganesha, son of Shiva and Parvathi, is the Hindu God of knowledge and the remover of obstacles. He is depicted with an elephant head, human body and is said to have a large pot belly (holding the entire universe in his belly). Ganesh pooja is performed to remove obstacles and to have a prosperous life. 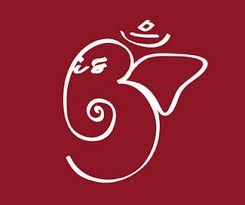 Ganesha is also called Ganapati (leader of people), Buddhividhata (god of knowledge), or Vighnahara (god to remove obstacles). Being one of the most important Gods in the Hindu religion, all sacrifices and religious ceremonies and start of a new business or any activity of importance are begun with an invocation to him.

Rat is his vehicle and is usually shown at the foot of the God, but sometimes Ganesh is astride the rat. This unique combination of his elephant-like head and a quick moving rat vehicle represents tremendous wisdom, intelligence, and presence of mind.

Ganesh Pooja is performed to remove obstacles and to have a prosperous life.  By praying to Lord Ganesh the son of Shiva and Parvati, we are blessed with knowledge, material prosperity and well-being. 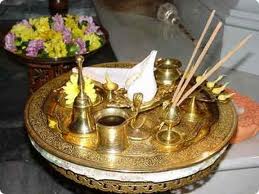 Pooja set-up: To perform Ganesh Pooja, set up a small platform and drape with a yellow cloth. Use photo, ganesh idol and/or create a small cone (1/2 – 1 inch) by mixing turmeric powder (2 tsps) with water and to this we apply some sandal paste and kumkum. Light lamps (preferably with ghee) and Agarbathis. Prepare modakam or any kheer/ sweets for nivedya. 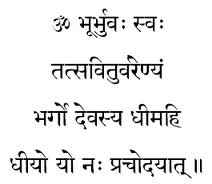 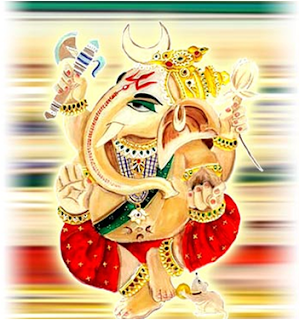 Meaning
We offer our prayers to the Lord Ganesh, the leader of the Ganas and Pramathas, who is one-tusked and pot-bellied. Our humble salutations and bow in obeisance, to the son of Lord Shiva, who removes all obstacles and grants us our wishes (boons). 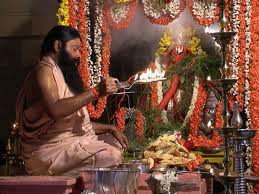 Chant, “MahaGanapathi prasaadam Sirasa Grahanami”.
As blessings received from Ganesha, some of the Akshada offered is placed on the head and the women can keep the flowers on their hair.

At the end of the Pooja, distribute the offerings (Nivedya) as Prasad.

About Mahaganapathi Homan (Havan): As Ganesha controls the material realm as well as the gate to the higher spiritual realms of being, his homam is very useful to any spiritual seeker. It facilitates spiritual progress while protecting the material aspects of one's life.