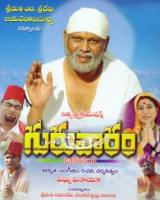 Guruvaram is a telugu documentary movie, about the Saint Shirdi Sai Baba directed and produced by Lakshmi Vinayak.  This movie was released on May 24, 2012, of course on a Thursday, as a tribute to Baba who attained Maha Samadhi on the Vijaya Dasami day, a Thursday.

Rami Reddy plays the lead role as Sai Baba. Cast includes Babu Mohan, Annapurna, Telangana Shakuntala, Uttej and others. According to the movie director, Shirdi Sai Baba is worshipped by many as Guru and Guruvaram (Thursday) is a very significant day for offering prayers to one’s Guru.

Lyrics and music in Guruvaram is by Sai Sri Harsha, Jaya Surya, Sashibala, Anuradha and Ravi Shankar. Yamesh, has missed the opportunity to make the movie more lively with his cinematography. It would have been a good movie to watch if more of Baba’s life and teachings were brought out than his miracles.