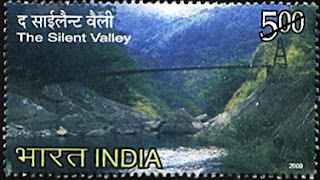 
The Silent Valley National Park (91 Sq.mi) , a unique preserve of natural rainforests, is located in the Nilgiri Hills, Palakkad District, Kerala.  The british named the area Silent Valley because of the absence of noisy Cicadas, which are present in all forests.


The River Kunthi flows from the Nilgiri hills and flows along the the valley and down to the plains through the deep forest.  One of the specialty of this river  Kunthi is that it never turns brown and the water is always crystal clear.


The area is locally known as "Sairandhrivanam" which literally means Sairandhri's Forest. According to a Hindu legend, Sairandhri is Draupadi, wife of the five Pandavas, who disguised herself as Sairandhri, queen Sudeshna's assistant, while they were in exile for 14 years. They wandered south, into what is now Kerala, until one day they came upon a magical valley where rolling grasslands met wooded ravines, a deep green river bubbled its course through impenetrable forest, where at dawn and twilight the tiger and elephant would drink together at the water's edge, where all was harmonious and man unknown. Beside that river, in a cave on a hill slope, the Pandavas decided to stay during their exile.


The government of India website gives the mystic details of this rain forest:
“The Valley exudes a quite grandeur, a mystery half revealed and half concealed that is part of a story older than mankind, for this rainforest probably dates back to 50 million years. Silently she beckons us to witness the marvelous exuberance of life that expresses itself in an incredible chaos of plants and animals and birds and insects. At the heart of her many songs is a still, deep silence which only those who tread softly and wait patiently may learn to hear.”