Self-realization and non-duality through Rubin's vase

What do you see? Do you see the faces or the vase? 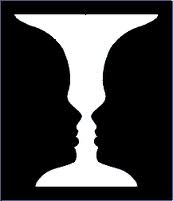 This is the famous optical illusion image devised by the Danish psychologist Edgar Rubin often used to illustrate the concept of figure ground. When two fields have a common border, one is seen as figure and the other as ground. You can see the image as either a central vase, or two faces that are looking at each other. This image is popularly called the Rubin's vase (sometimes known as the Rubin face or the figure–ground vase).
The spiritual truth: We see an article. The act of seeing has both an object (the particular article seen) as well as the subject (one who does the act of seeing). These two states (object and subject) are separate and distinct from one another. The body is seen, so it is the object. Atma (soul) sees, so it is the subject. This analogy can be extended to other acts such as perception or consciousness. The body is perceived, so it is the object. Atma (soul) does the act of perceiving . so it is the subject. Thus the body and the soul are separate from one another. He who considers the soul as that which is seen (that is, confuses the object for the subject) can only be termed as an aggyani (ignorant of reality/truth).
The spiritual seeker eventually acquires the intuitive wisdom of direct perception and understands the Eternal Truth and solves the mystery of how the Brahman (divine) is seen at the same time as both manifested in (immanent) and encompassing of the material world (transcendent). He realizes his oneness with God and understands that he himself is a microcosm of immanence and transcendence (Non-duality).
Shankara’s realization expressed through Manishaa Panchakam 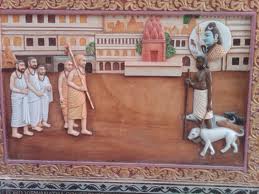 Adi Shankara Acharya, spiritual guru who spread the Advaita philosophy once encountered a Chandala (person born in a caste other than a brahmin) in his path and asked him to move away from his path.  The chandala enquired Shankara, if he sees his body different from the Shankara’s body. He also asked if Shankara wanted his body or his consciousness to move away from Shankara’s body or his consciousness.  “What do you want me to move?”  Shankara’s illusion of how he perceived the subject and object was shattered and fell at the Chandala’s feet. There is no two object.  The subject and the object is the same. The Brahman within you is the same in all things and there is no difference. He truly realized the concept of Advaitam (non-duality) and composed the Manishaa Panchakam.


Do you see a face or faces? 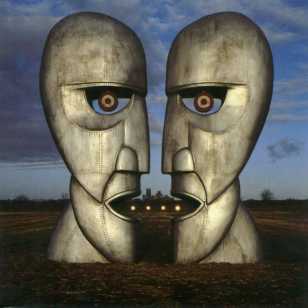 The album cover artwork for Pink Floyd's The Division Bell is an example of a Rubin-vase-like construction. The two metal heads in profile facing each other form the image of a third face looking directly at the viewer.
The Bhagavad Gita (9-2): Self-realization is the yoga or “oneness” with the ultimate truth. Based on all valid religious experiences, the Gnani or the seeker, understands through his body (senses), mind and soul, that we are one with the omnipresence of God.
Acknowledgements:
http://en.wikipedia.org/wiki/Rubin_vase