Shirdi Sai Baba created a garden and took care of it himself. Through this experience of tending the garden he has showed us the way to nurture and be nourished. He shows us the unconditional love and that he loves us, the real us, "the soul" and that our relationship with him is special. He makes us understand the beauty and joy of connecting with nature which means connecting with our own higher self, higher consciousness.  Self realization is indeed God realization.

Baba went to Rahata (3 miles from Shirdi) and He brought with Him small plants of merrigold, Jai and Jui, and after cleaning a small area nearby, he planted and watered them. 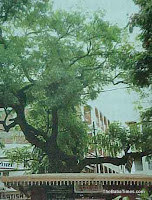 A devotee, by name Vaman Tatya, supplied Him daily with two unbaked earthern pitchers.  With these Baba Himself used to water the plants.  He drew water from the well and carried the pitchers on His shoulders.  In the evening, the pitchers were kept at the foot of the Neem tree.

As soon as they were placed there, they were broken as they were made of raw earth and not baked.  Next day, Tatya supplied two fresh pitchers.  This continued for 3 years, and with Sai Baba’s toil and effort, there grew a garden.

On this site, at present, stands the big mansion – Samadhi Mandir of Baba, which is now frequented and used by so many devotees. 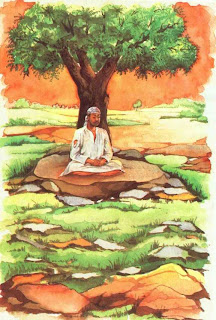 Baba never made any fuss about the things, which He wanted to accomplish, but He so skillfully arranged the circumstances that the people were surprised at the slow but sure results attained.  The construction of the Samadhi Mandir is an instance.

Shriman Bapusaheb Buti, the famous multi-millionaire of Nagpur, lived in Shirdi with his family.  Once an idea arose in his mind that he should have a building of his own there.  Some time after this, while he was sleeping in Dixit’s wada he got a vision.  Baba appeared in his dream and ordered him to build a Wada with a temple. Shama,  who was sleeping there, also got a similar vision. 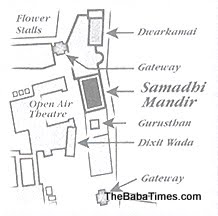 When Bapusaheb awakened, he saw Shama crying and asked the latter, as to why he was in tears.  The latter replied that in his vision, Baba came to him and ordered distinctly: “Build the Wada with the temple! I shall fulfill the desires of all.” On hearing the sweet and loving words of Baba, I was overpowered with emotion, my throat was choked, my eyes were overflowing with tears and I began to cry”.  Bapusaheb was surprised to see that both their visions tallied.  Being a rich and capable man, he decided to build a Wada there and drew up a plan with Shama (Madhavrao).  Kakasaheb Dixit also approved of it.  And when it was placed before Baba, He also sanctioned it immediately.

Then the construction work was duly started, and under the supervision of Shama, the ground floor, the cellar and the well were completed.  Baba on his way to and from Lendi, also suggested some improvements. 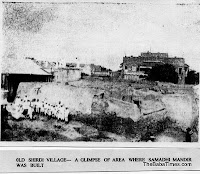 Further work was entrusted to Bapusaheb Jog; and when it was going on, an idea struck Bapusaheb Buti’s mind that, there should be an open space or platform and in the centre, the image of Muralidhar (Lord Krishna with the flute) be installed.

Buti asked Shama to refer this matter to Baba and get His consent.  The latter aked Baba about this when He was just passing by the Wada.  On hearing Shama, Baba gave His consent saying, “After the temple is complete, I will come there to stay”.  And staring at the Wada He added, “ After the Wada is complete, we shall use it, we shall live, move and play there, embrace each other and be happy”.  Then, Shama asked Baba, whether this was the auspicious time to begin the foundation-work of the central room of the shrine.  Baba answered in the affirmative.  Then Shama got a coconut broken there and started the work.  In due time the work was completed and an order was also placed for making a good image of Muralidhar.  But before it was ready, a new situation turned up.

Baba become seriously ill.  Bapusaheb became very sad, and dejected, thinking that if Baba passed away, his Wada would not be consecrated by the holy touch of Baba’s Feet, and all his money (about a lakh of rupees) would be wasted away.  But the words, “Keep me in the Wada”, which came out of Baba’s mouth just before His passing away, consoled not only Bapusaheb, but one and all. 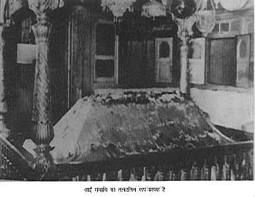 In due time, Baba’s holy body was placed and preserved in the central shrine meant for Muralidhar, and Baba Himself became Muralidhar, and the Wada thus became the Samadhi Mandir of Sai Baba.  His wonderful leela is unfathomable.

Blessed and fortunate is Bapusaheb Buti, in whose Wada lies the holy and the pure body of Baba.