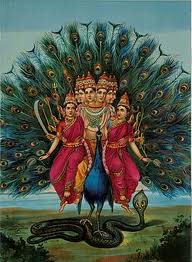 Lord Muruga, also known as Shanmuga, Skanda, Kartikeya and Subrahmanya, is the primordial energy, created to save the world from the asuras (dark and negative forces). He is the Lord of the army of Devas. 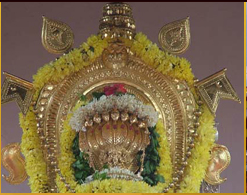 According to the Hindu calendar, Lord Muruga’s birthday is celebrated on the Vishaka Nakshatra which falls in the Vaikasi month. He is the son of Shiva and Uma Devi (Parvati).  Muruga’s Vahana is the Peacock and with one of his hands he holds his weapon, the spear (Vel) and with his other hand he holds a flag with rooster symbol. 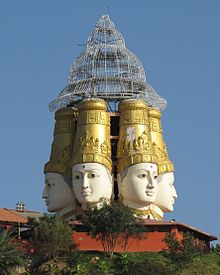 Being the Lord of courage, valor, beauty and intelligence, he blesses his devotees with the same characteristics. He is also called the six-faced lord Arumuga Swamy.  With his six faces (5 faces of Lord Shiva and one face of Goddess Uma Devi), he is said to protect his devotees in all the 6 directions: East, West, North, South, Skyward and also the Earth.  Being the son of Shiva and Uma Devi, he is said to bless people with the comforts of this world and also the other world.
.
Six is a very powerful number associated with Lord Muruga and the six syllable mantra “SARAVANABHAVA”, was revealed by Lord himself, to Sage Agastya.  The six syllables are said to mean:

While you chant this mantra (either silently or out loud), visualize Muruga’s Peacock, Rooster symbol on his flag and his Vel (weapon) forming a protective shield around you. This year Vaikasi Vishaka also happens to be a Sani Pradosham day. (Pradosham falling on a Saturday).

On this day, special poojas like Archana (reciting of Lord’s names) with fresh flowers and Abhisheka is performed by devotees with water, milk and other abhisheka materials like honey, chandan, panchamrut etc. Singing of various hymns and bhajans in praise of Muruga helps devotees overcome their obstacles and attain health, wealth and prosperity by his grace.

Meaning:
Whatever syllable or word or syllabic instant has been left out,
may they be returned back correctly as each should be.
May all that be forgiven Oh divine Narayana. Salutations to you,
To the glorious Narayana, salutations, salutations.