Why do the ancient scriptures, religions and traditions of the East like Hinduism, Buddhism , say 108 as sacred? Is 108 a very important number in Vedantic chantings because the great scholars knew something that we don’t?

The individual numbers 1, 0, and 8 represent one thing, nothing, and everything (infinity). 108 represents the ultimate reality of the universe as being (seemingly paradoxically) simultaneously One, emptiness, and infinite.

The Rosary beads known as the Japa Mala has beads for 108 repetitions of a mantra (Japa),usually called Naam Japa done during religious ceremonies.

There are Ashtothras  with 108 names of the respective deity. Like, Lakshmi Ashtotra.

Let us explore this even though we can never have an absolute view of anything but only a general view.

108 degrees Fahrenheit is also the internal temperature at which the human body's vital organs begin to fail from overheating.

Historic significance:
The pre-historic monument Stonehenge is about 108 feet in diameter. 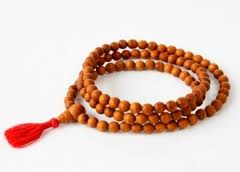 In a book by Khurana, the explanation closely mirrors the original Vedic justifications: A circle has 360 degrees, which when multiplied by 60 gives us 21,600 minutes in a circle. 60 comes from the 60 'ghatis' which Sanatana Dharmiks believe in. One ghati is equal to 24 minutes and 60 ghatis come to 24 hours. One ghati is divided into 60 parts or 'palas'. So the 60 ghatis multiplied by 60 palasa comes to 3,600. This is further multiplied by 60 (becase a pala contains 60 vipalas) which gives us 21,600. Half of this is for the day, and the other half for the night. So, 21,600 divided by 2 gives us 10,800. For practical purposes, we use 108. Using the number 108 helps us coordinate the rhythm of time and space & we remain in harmony with the spiritual powers of nature.

Mantra and Tantra significance:
Sri Yantra: On the Sri Yantra there are marmas where three lines intersect, and there are 54 such intersections. Each intersection has masculine and feminine, Shiva and Shakti qualities. 54 x 2 equals 108. Thus, there are 108 points that define the Sri Yantra as well as the human body.
Meru: This is a larger bead, not part of the 108. It is not tied in the sequence of the other beads. It is the guiding bead, the one that marks the beginning and end of the mala.

In Japan, at the end of the year, a bell is chimed 108 times in Buddhist temples to finish the old year and welcome the new one. Each ring represents one of 108 earthly temptations a person must overcome to achieve nirvana.

Sikhism: The Sikh tradition has a mala of 108 knots tied in a string of wool, rather than beads.

Chinese: The Chinese Buddhists and Taoists use a 108 bead mala, which is called Su-Chu, and has three dividing beads, so the mala is divided into three parts of 36 each.

Biological significance:
Heart Chakra: The chakras are the intersections of energy lines, and there are said to be a total of 108 energy lines converging to form the heart chakra. One of them, sushumna leads to the crown chakra, and is said to be the path to Self-realization.

Yogic significance:
According to Ayurveda and the Chinese school of martial arts, there are 108 pressure points in the body, where consciousness and flesh intersect to give life to the living being.

Marmas or marmastanas are like energy intersections called chakras, except have fewer energy lines converging to form them. There are said to be 108 marmas in the subtle body.

Astrology:
There are 12 constellations, and 9 arc segments called namshas or chandrakalas. 9 times 12 equals 108. Chandra is moon, and kalas are the divisions within a whole.
Planets and Houses: In astrology, there are 12 houses and 9 planets. 12 times 9 equals 108.

Epic significance:
Gopis of Krishna: In the Krishna tradition, there were said to be 108 gopis or maid servants of Krishna.

Fine Arts Significance:
Dance: There are 108 forms of dance in the Indian traditions.

Miscellaneous:
An official Major League Baseball has 108 stitches.
108 is the name of a community of and for open source developers, created by Red Hat.
There are 108 cards in a deck of UNO cards.
In India, 108 (1-0-8) is the toll-free emergency telephone number.

Email ThisBlogThis!Share to TwitterShare to FacebookShare to Pinterest
Labels: 108, 108 names, sacred 108, significance of 108, why 108?